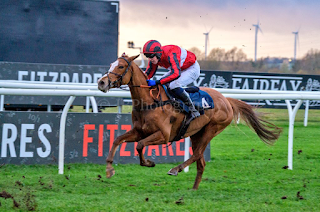 What a smashing day BDR owners had on Sunday with their filly Hillfinch who now boasts Black Type after a extremely gallant third on Peterborough Chase Day at Huntingdon. A 20k Fillies and Mares race Class 1 Listed event.

Loads of previous winners finished behind her so that looks strong form. The 4th in Sundays race FLYING SARA who we beat by 5 lengths has run 4 times winning twice and a just beat 2nd in another listed race at Cheltenham on the 14th November. The winner of that race was the Paul Nicholls trained John Hales owned TIMEFORATUNE.

Really exciting to have such a prospect in our ranks for this season. Hillfinch is our first leased horse.

BDR are really keen to take as many owners as we can on this journey and we still have a little to syndicate. Hillfinch has come out of her race well and her trainer Stuart Edmunds hopes to get her started over hurdles at  Christmas.

Being a free lease there are no upfront costs to pay just the monthlies to keep her, anyone who fancies getting involved with this future winner drop me a line. colinburr34@googlemail.com or on 07780 607976 (just 5 payments) prize money paid at the end of the term.

Lovely pictures from John Bartlett who has given me permission, below owners being debriefed.

Since May 1st since the 2021/22 National Hunt Season started BDR horses have run 21 times with 66% resulting in our owners either winning or getting into the winners enclosure. We even had a DQ when winning so could've been better still!

Racing is a tough game, we have had bumps along the way with injuries which is tough to take. Some of our unraced horses we would have liked to have seen sooner. But plenty of good days also.

The first winner I had as a owner was a 10% share in a horse called Kings Troop. I was told quite firmly to 'enjoy every minute of this win Colin as some people own horses for 25 years and never have a winner' a line I now pass on to some of our winning owners.

Baby Ben was running a absolute cracker at Market Rasen on Thursday when tipping up 2 out. What a shame he would've been in the mix. although sore hopefully Ben will be cantering again next week. Smashing prospect. We love him.

Congratulations to in house trainer Caroline Bailey who won the last race with their LORD SPARKY. Really exciting to watch. Topped off a smashing afternoon. 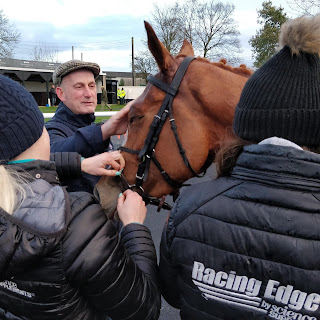 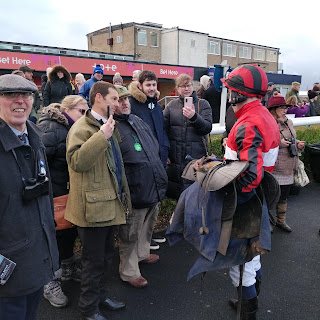 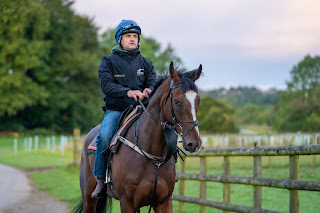 credit Louis Gill                                                 Baby Ben at O'Brien/McPherson Racing There has been loads of action since Josie Abbing won for us on the 5th September & Calum Gilhooley on the 16th August, Graeme McPherson Racing has merged with Fergal O'Brien Racing which although came as a shock its plain for everyone to see how good a trainer Fergal is. Good luck to them both. We hold 2 entries for Josie Abbing at Hereford Tuesday in a Mares Handicap and another in a Handicap Hurdle, She likely will go for the former, Lilly Pinchin I hope will ride her again. The other entry on the same day different meeting is Stuart Edmunds trained Miss McGugen in a Mares Maiden Hurdle at Huntingdon. Stuart and his team enjoyed a great night winning the best trainer for smaller yards award at The McCoys last night (7th Oct) well done to them all. BDR owners enjoyed a super morning last Saturday at the Newport Pagnell yard of Stuart Edmunds. We watched on the gallops 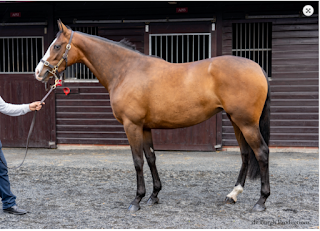 BDR went shopping at the stores yesterday, Graeme kindly and successfully bid on this filly by Beat Hollow who also sired this years Gold cup winner Minella Indo. The dam was well known to the syndicate Tickity Bleue was trained by Alan King and won twice and placed a further 3 times, she was a nice mare won a bumper and hurdle race injury shortened her career, I personally owned a share in Tickity when a member of the well regarded Lets Live Racing syndicate.  The above 3 yr old is a good sized filly, was not a lot of money and if you would like to get involved drop me a line 07780 607976 or colinburr34@google,mail.com for pre enquires. I fully expect us to fill within days. Our horses never cost a Kings ransom and we have proven that you do not have to for winners to flow. Thanks for reading